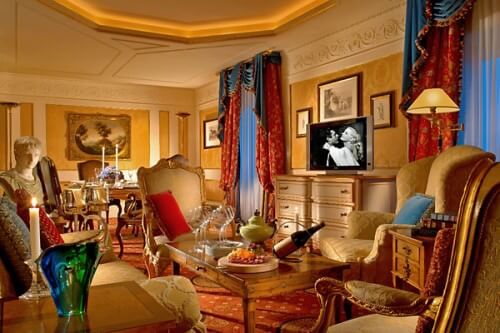 I recently found out a client of mine–and her husband–committed suicide. It made the news, but the story wasn’t accurate. It had the couple’s ages reversed, said they were from California instead of Oklahoma, and failed to mention that the wife survived only one additional  day after being retrieved from the hotel room. They were in their fifties.

When you read an email with news like that, you just say, “Wow.” It slaps you upside the head and you can’t just shake it off.

I’m not unexposed to suicide. I worked mental health, the crisis hotline, detox, and case management before I went web. I’ve done suicide intervention and I’ve had clients kill themselves before. Not in this business though, no. And it doesn’t feel the same.

They were in Rome, staying in the Hotel Splendide Royal (pictured above). After having sold all their belongings, they were on a tour through Europe. They had told their family and friends they were traveling, and would decide what they wanted to do when they got back. They had said goodbyes. During the trip they’d contacted folks, let them know what a wonderful time they were having.

Nobody was hurt, sick, or in pain. They felt like they had completed what they wanted to in this lifetime, and they wanted to cross over together. They asked friends not to judge, but to be happy for them, and respect their decision. They wanted to leave on a joyful note.

I didn’t know her very well–I’d done a website for her a few years ago, and handled her hosting. She was sweet and very, very kind to me, always. A gentle, soft-spoken woman. But I could go months at a time without talking to her, without a reason to, so it’s not like we were close.

But when I found out, I cried. And weird as it was, my feelings were hurt. It felt like she had done something to me. I couldn’t tell you what, because she certainly didn’t owe me anything. It made no sense whatsoever. But it didn’t matter. It upset me.   (I’ve no doubt it’s got to be the tiniest fraction of what somebody who loses someone close to them feels, and it sucked.)

And it pissed me off, too. What the Hell, you know? I prefer people I like not go and off themselves.

Which left me upset with myself for being upset. What right do I have to tell her how to live her life–or end it? How is this my business? If I liked her, don’t I owe her my best attempt to honor her wishes? Can I be happy for her?

I’ve been trying to sort this out the last week; today, I realized I’m also pissed off about being reminded that I am mortal. I am aging, my husband is aging, and someday, the one question of one or the other of us dying will become a reality. I haven’t met anybody that’s figured an out yet.

My husband says the one thing he didn’t know about being married to me would probably have dissuaded him: the level of attachment. The thought of being without the other once you’ve bonded to that point is terrifying, disturbing in a way that defies description. In 21 years, you can get awfully used to someone. I don’t want to be without him or leave him without me. I just figured we’ll be one of those couples that go about the same time, because…well, we’ll want to.

So, is it wrong they wanted to die together, without paying the dues of  age or illness first? For whom is it to say what way someone else should die, when or how?  It obviously impacts others, but it’s not about others. It wasn’t my life, so it wasn’t my decision (clearly).

I liked and respected her. So I’ll do my best to respect her request and intent, but it’s not something that I can imagine feeling joyful about anytime soon.