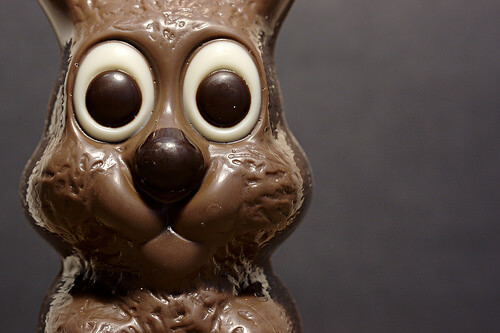 When our kids were little, like most kids, they got too much candy for Easter. Hyperactive little munchkins anyway, right? They’d gobble some, and when they slowed down, we’d put the rest away for later. Usually, there was part or most of the chocolate Easter bunny left over. Into the fridge it goes.

Then, a conscientious parent would do their parental duty to save the child from the obesity epidemic (and a potentially annoying sugar buzz): sneak into the kitchen when the kid is busy watching TV, and snap a piece of that Easter Bunny’s ears right off for a quick snack. As long as you avoid easily identifiable parts and don’t suddenly behead a previously intact bunny torso, nobody’s any the wiser.

Unless you’re like I was, back in my sugar-eating days, and lacking a little in self-control.

Making one too many trips to the bunny box, eventually you realize what you’ve done. Now, you’re faced with the potential righteous wrath of an indignant  five-year-old whose candy you have stolen. That’s a pretty serious infraction to a five-year-old, you know.

You could ‘fess up and face the music with an earnest apology to your offspring, presented with a promise to replenish the chocolate stash and then some. Heck, the kid would probably learn some life lesson about honesty or apologies or some other such shit.

Or…well…you could also break the remaining chocolate bunny in a bunch of much smaller, unidentifiable pieces, and put them all in a baggie in the fridge after bedtime. Destroy the evidence. Guess which one I did?

“Hey, what happened to my Easter bunny?” Radar’s up immediately. Candy is serious business.

“Oh, I broke it up into pieces for you. It’s easier to eat that way,” said in my best helpful-mom voice.

Tilted head, her eyes narrow. She’s suspicious. She knows something’s not right. “Are you sure…?”

The kid knew something was fishy, but wasn’t sure enough to pursue it. I felt a twinge of guilt for a minute, but it didn’t stick. After all, how much Easter candy does a kid really need, anyway?

2 thoughts on “Tips for Stealing Your Kids’ Easter Candy”