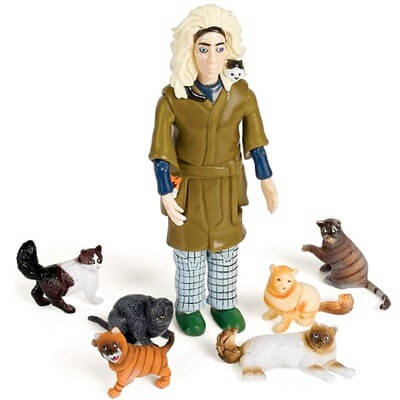 Well, hell. It’s rude. That’s what it is. But you know, sometimes, people are rude. But damn.

“I’m not afraid of any crazy cat lady!” says the neighbor’s crimson-necked companion. His neck seems to be getting redder by the second.

“That’s rude,” Neanderthal Neighbor replies jokingly. “You should take that back.” I glance around. There’s nobody else outside.

Ohhhh–they’re talking about me! The fuckers!

I mean, OK. I’ll cop to being eccentric. I have pink and purple hair, so that would qualify. And yes, we have cats. Several of them. I even talk to the cats, it’s true. But they can’t see me talking to them when I’m outside.

And so what if I sometimes rollerskate in the parking lot? I haven’t done that much this year. Who cares if I thank my flowers for their beautiful blooms when I’m pruning them, or toss the spent blooms out into the parking lot while wishing (perhaps aloud) that they may bring peace and joy to all? I’ve only burned sage on my front porch to get rid of yucky energy a few times.

And I think the Goddess-mobile is COOL, just how it it, with my Goddess tags and my “Back Off, I’m a goddess!” bumper sticker.

And I usually don’t wear my snowman pants unless I’m not leaving home, or maybe only when I’m going to the Kwik Shop.

So how would that Bastard know if I’m all that crazy or not?!

I told my daughter about it. I said, “I should just meow at the fucker next time I see him! Meow! That would serve him right. Just because he thinks I might be crazy doesn’t mean I can’t hear. The rude bastard!”

She was mortified. “Mom, I don’t THINK you’re serious, but I have to say I’m not entirely sure. Please don’t meow at him! They already think we’re crazy…I have to live here, too!”

I didn’t meow at him, but it was tempting. I just toss him a dirty look when he comes outside. If he wasn’t afraid of me before, perhaps that will raise questions in his mind. I have some pretty wicked dirty looks that I’ve developed over the years, you know…moms totally have the most powerful dirty looks ever invented, man.

On the meowing…well…I haven’t completely ruled it out yet. But I will (probably) respect the kid’s wishes on the issue. Most likely, I wouldn’t have meowed at him anyway. But I have to admit: the thought of the look on his face if I meowed at his Neanderthal ass and gave him a little cat hiss cracks me up.

As it is, even the dirty looks seem to make him pretty uncomfortable. He deserves it, if you ask me. You shouldn’t go badmouthing people you don’t even know, standing within a few feet of ‘em, no less. Maybe I’m a litte nuts, but I’m not a fucking moron, for Christ’s sakes.