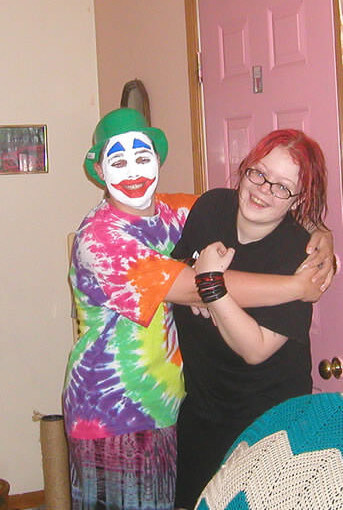 With my daughter having moved far off, a couple people have asked me if she’s looking for work. I’m sure they think I’m mental when I tell them I have no idea whatsoever, have not asked–and am not planning on asking.

It’s not because it would upset her, or be a touchy subject somehow. She’s straightforward, and doesn’t have issues with the idea I care about how she’s doing. She’s honest and direct when I question her. It’s really a lot simpler than that.

One parenting lesson I’ve internalized is to let your kids run their own lives. It’s less stressful for everybody. You can lay down hard cash on the fact that they will NOT manage things the way you would. Even when they do, it certainly won’t be on your timetable. The more you’re wrapped up in it, the more it will drive you insane. (If I can avoid being driven insane by decisions I have zero control over, I find it a good plan.)

But even if their decisions wouldn’t give you pause, it’s still a good plan.  Letting go and trusting in their ability to manage their own stuff ultimately (whether or not it’s pretty) is validating. It’s appropriate. And most of the time, with most kids–that trust is warranted.

The water gets a little muddier when the kid is hovering on a self-destruct button, or slinging crazy all over a floor you’re going to end up mopping. But the basic principal holds. If I see one of my kids headed for a brick wall, I’m going to holler, “Watch Out!”  If I didn’t, I’d always wonder if it would have made a difference.  But beyond, I’m going to stay out of it. I won’t contribute to it, but I’m not going to try to dismantle the process, either. It’s my responsibility to determine what ways I can feel good about participating in my kids’ lives, and eliminate ways I’m not willing to.

But if my grown-up kid decides to hit the accelerator on the path to devastation anyway…well, much as I may hate it, it’s not my business anymore. I’ll be honest: it will make you sick to watch. So you try not too. But your kids or not, they are adult, free-willed, self-determined beings. It is not my right to enforce my will upon them, even if I’m “right” by most standards.

So instead you step back; you let go and hope that whatever lessons they’ve got in the wings they manage to navigate, without killing themselves or wrecking havoc in other lives. You distance as much as you need to in order to let go. And as unsettling as the thought may be, you come to terms with the fact your kid may end up jacked, one way or another. That’s a pretty disturbing thought first time it hits your brain. But it’s true as the sun coming up in the East, and to deny that is to deny reality.

This isn’t the situation with my daughter now, I’m glad to say. She knows if she has concerns, if she wants advice, if she wants support, then I’m available to her, period. She’s not going to take me up on that for every little issue, though; she wants to figure out her own problems, manage her own life without constant input from her parents. It’s both important for her self-esteem and age-appropriate. This is what you’ve spent those years teaching and coaching them for–the day they go out to do it on their own. It’s bittersweet, to say the least.

Walking out of the house on the day she moved, she turned and paused in the doorway.

“Good luck with that,” I say with a wry smile.

We laughed. But you know what? I meant it.